Nominees will be selected to represent as much diversity as possible, although not selected to represent a particular group. Faculty and staff nominees will be selected from the Columbus and regional campuses. Nominees will be selected on the basis of the ability to view issues affecting women from both a personal and campus wide perspective. Nominees must be able to actively participate in the work of the council by attending council meetings and participating in a task force subcommittee. Should a member be unable to regularly attend council meetings and actively participate in their task force subcommittee, the leadership team may terminate the member’s appointment.

(These terms will be served outside of the normal three-year term. Ex officio members are not eligible to hold offices.) 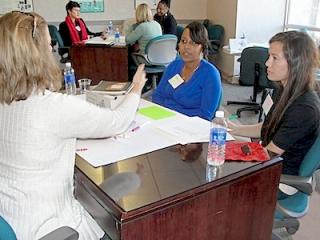 Chair: one-year term - the chair is responsible for vision and leadership; ensuring that appropriate processes are followed to fulfill the requirements in this document and the assignments of the President and Provost; calling and presiding at council meetings; setting the agenda for those meetings; working with The Women's Place to make sure logistics work smoothly; and representing PPCW on other university bodies as appropriate.

Chair-elect: one-year term - the chair-elect serves as the deputy and representative for the chair in any circumstance in which the chair is unavailable; attends all PPCW meetings; works with The Women's Place staff to plan the annual retreat; provides leadership continuity from one year to the next and takes on other duties as assigned by the chair.

A chair and chair-elect of the council will be proposed by the council to be appointed by the president and provost to a one-year term each. The immediate past-chair will serve an additional year following the end of the term as chair.

The council will consist of 24 members. Nine will be ex officio and serve by virtue of their positions (see below), 14 will be appointed by the president and the provost to three-year terms, and one will be an external member appointment for a flexible term of 2-5 years. The 14 appointees shall represent as much diversity as possible, including diversity of rank and position at the university. One third of the 14 appointed members will rotate off the council each year

The council will issue an annual call for nominations in autumn semester. Individuals may nominate themselves or may be nominated by others. The process will include solicitation of nominations from existing groups representing faculty and staff and from individuals, inside and outside the university. The Women's Place will collate these nominations and deliver them to the past-chair.

The chair-elect will communicate with the president and provost regarding the appointment of new council members. The president and the provost will appoint the new members to the council from the list of nominees selected by the PPCW Leadership Team, which is comprised of the chair, chair-elect, past-chair, and The Women's Place director and assistant director. Special liaison members who are not members of PPCW will be added to subcommittees as needed to complete the work of the council and to address emerging issues 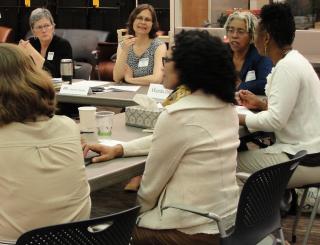 Ex officio membership (with no set term) would be conferred on people who hold the following roles:

None of the ex officio members may hold office. The first four of the ex officio members: the Director of The Women’s Place, Assistant Director of The Women’s Place, the Associate Vice President for Ohio State ADVANCE, and the representative from the Office of Human Resources will have voting rights as their positions involve policy for women at the university. The remainder of the ex officio representatives will be highly valued members of the council and contribute expertise and advice from their experience but will not be voting members of the council.

External membership (2-5 years) will be conferred based on the following criteria:

The council will meet at least every other month as a full council, and as necessary in subcommittees to address the tasks and goals for the year. The council will track the progress of and regularly report to the university community on:

The council will develop a regular reporting relationship to the president and provost and will be supported by the executive staff of The Women's Place to carry out its work.